Plugging in to Fall Asleep: Examining Bedtime Device Use

How much time do you spend wrapped up in your smartphone every day? The average person is on their phone for more than three hours per day, with the top 20 percent of users breezing past four and a half. Of course, that’s just a fraction of the 11 or so hours that we spend basking in the glow of screens in general on the daily.

Given how much we use them during our uptime, it’s not difficult to imagine how devices that are essentially akin to another limb can incorporate themselves into our downtime as well. But where do people draw the line and finally unplug for the night?

“Our sleep-wake rhythm follows the light-dark cycle,” says Dr. Nayantara Santhi, Ph.D. “Melatonin (the hormone of darkness) levels start to rise with the onset of darkness and this acts as a signal for the brain to prepare for sleep. Light suppresses melatonin and that is why using digital devices in bed affects our sleep.”

We wanted to know how often people scrolled themselves to sleep and how their device use habits affected the quality of their rest. Here’s what we gleaned from a survey of 1,000 Americans.

These days, you would be hard-pressed to find a source that recommends mixing sleep with your phone or tablet. But that didn’t stop many of our respondents from doing so anyway! 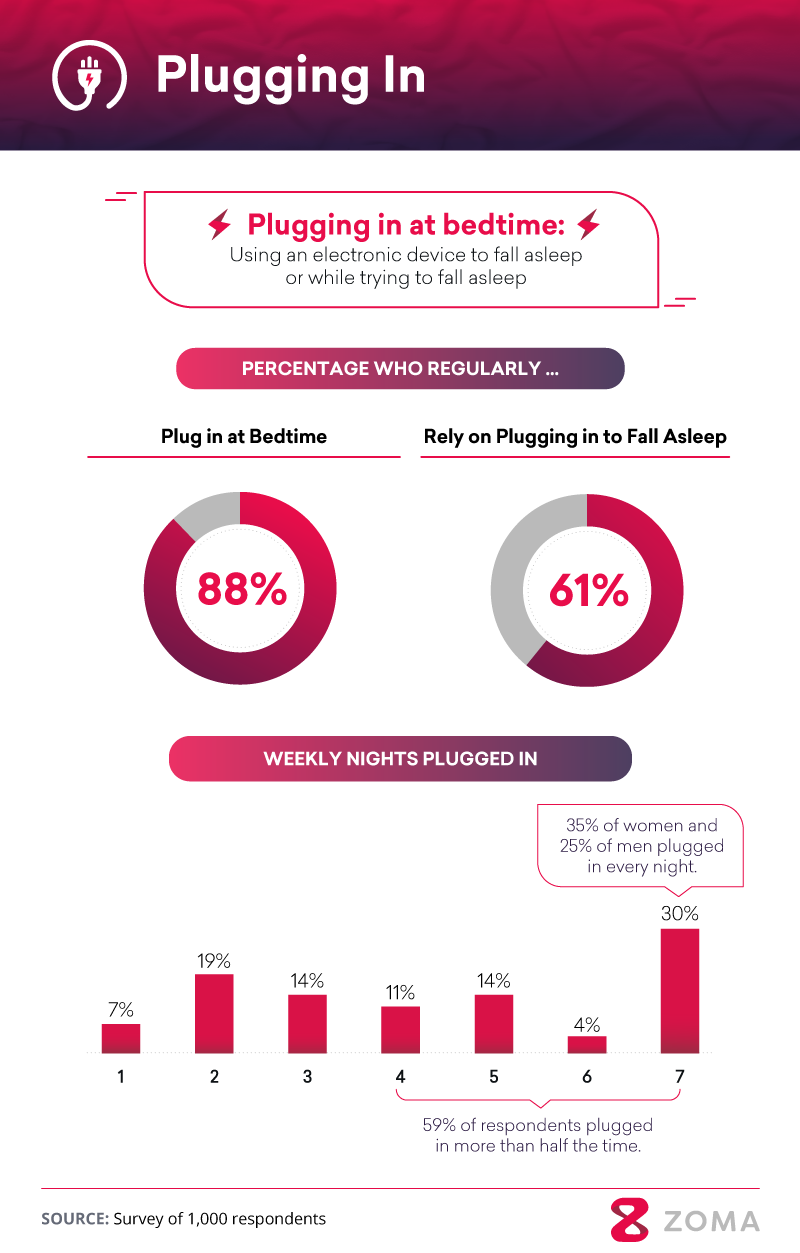 It’s largely accepted that using devices before bed – or even in the middle of the night, as was the case for 12 percent of respondents in a recent Public Library of Science study – typically keeps you awake instead of lulling you to sleep. This is due, in part, to the way that light stimulates our brains, suppressing melatonin and tricking our bodies into thinking it’s time to get up and moving.

“It can be tempting to use your phone if you’re trying to fall asleep, but in many cases it can do more harm than good,” said James Nguyen, a sleep expert at Zoma.

Nevertheless, 88 percent of our surveyed population said they regularly use an electronic device to drift off or while they try to fall asleep. In fact, 61 percent depended on this ritual to get to sleep at all. When it came to how many nights per week people turned to smartphone scrolling instead of counting sheep, the highest proportion of people (30 percent) said they did so every night. Overall, 59 percent of respondents did so more than half of the time.

There were some fairly large differences among the content and devices people enjoyed using most before bed. 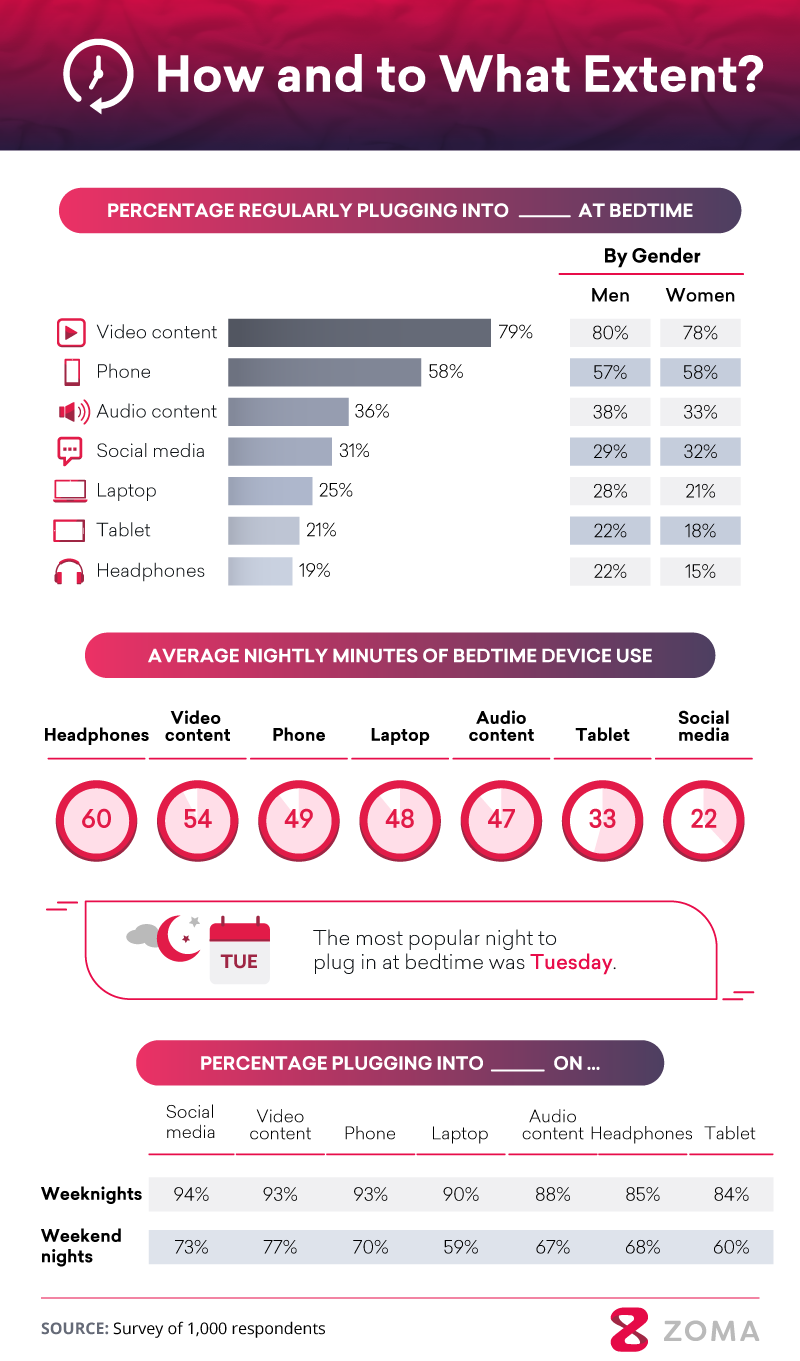 Our respondents preferred video content by a large margin: 80 percent of men and 78 percent of women said they regularly plugged into videos at bedtime for an average of 54 minutes. Phone use was a fairly distant second, with 58 percent of respondents regularly scrolling before bed.

The technology that was used for the longest period was headphones, with an average of 60 minutes per session (although only 19 percent of respondents said they used headphones to help them sleep). If you’re someone who frequently listens to a podcast before bed, bear in mind that prolonged headphone use may lead to hearing damage, especially if the sound continues to play all night – so here are a few handy tips for preventing damage to your ears.

Respondents used their phones for an average of 49 minutes and their laptop for 48 minutes. Even though people’s daily social media use is typically measured in hours, this digital distraction was only used for an average of 22 minutes. However, it proved to be the most popular choice for weeknight bedtime browsing, as reported by an impressive 94 percent of our surveyed population. Overall, many more people found themselves on a device during the week compared to weekend nights.

Dark Side of Social

Most people know that a good night’s sleep is vital to a sharp mind and a healthy body – could that account for so many people feeling guilty about plugging in before bed?

Social media has come under fire as a source of significant stress for many more reasons than one: It leads us to compare ourselves with others in unhealthy ways; it torpedoes feelings of gratitude while stoking the flames of inadequacy; and it keeps us up at night, literally.

Compared to all other digital distractions, social media was a source of sleep issues for the highest proportion of respondents at 54 percent. More specifically, it was the most prominent culprit behind every negative side effect (staying up later, getting less sleep, getting lower-quality sleep, and feeling less rested).

But the downsides didn’t stop there. More than phones, laptops, and video content by a fairly large margin, the use of social media before bed stirred up feelings of guilt in the most respondents, as well, at 41 percent.

Sixty-five percent of people felt they should stop, and 53 percent had already tried. In fact, nearly half (or more) of respondents had attempted to stop using the bedtime devices listed except the two least associated with guilt: headphones (45 percent tried to stop) and audio content (40 percent tried to stop).

Of course, plugging in isn’t all bad. Some forms of content were actually quite relaxing and stress-relieving for our respondents … while others fell flat in this category. 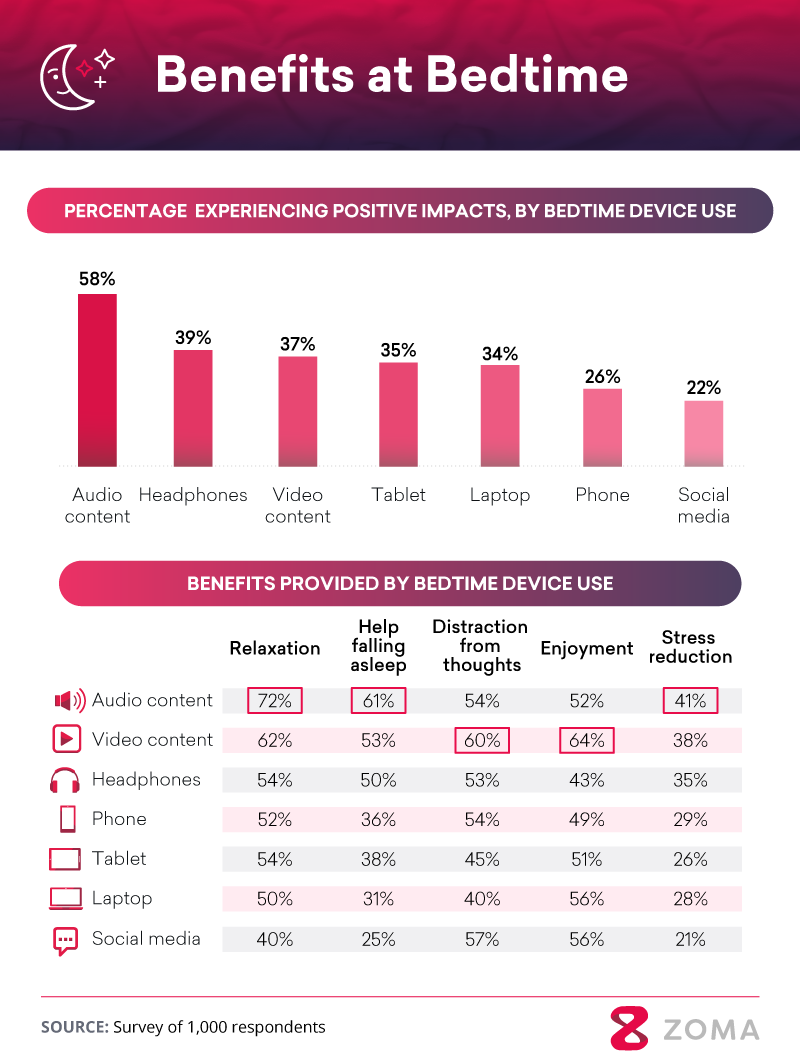 Audio content had a higher reported success rate than any other option, with 58 percent of respondents feeling a positive ripple effect. In comparison, just 22 percent said the same about social media, and 26 percent felt that way about plugging into their phones to try and get to sleep.

Still, that also means that almost half of our respondents felt that audio content didn’t help them fall asleep, so it’s far from a perfect relaxation method.

Podcasts, one of the most popular forms of modern audio entertainment, might be a great way to unlock these sleep benefits: According to a recent Edison Research study, more people than ever are listening to podcasts across a wide range of demographics. Still, as with any stimulating content, it’s usually best to shut it off when it’s getting close to bedtime.

While video content scored the highest for the two other benefits (distraction from thoughts and entertainment), it does not necessarily lead to improved sleep.

Even if you leave all of your devices in an entirely different room, you’re still unlikely to get a good night’s sleep if your mattress is subpar. Zoma mattresses aren’t just comfy, cooling, and backed by a 10-year warranty: They’re designed specifically for athletic performance, promoting speedier muscle recovery, improved stamina, and more. Visit ZomaSleep.com to check out our memory foam mattresses, hybrid mattresses, pillows, and adjustable beds so that you can always perform at your peak.

We surveyed 1,000 people using Amazon Mechanical Turk. To help ensure that respondents took our survey seriously, all respondents were required to identify and correctly answer an attention-check question. 756 respondents “plugged in” at least once per week by using technology while trying to fall asleep, and 244 respondents did not plug in regularly. 507 respondents were female, and 493 respondents were male. Respondents ranged in age from 18 to 80, with an average age of approximately 38. Our margin of error was 3 percent, with a 95 percent confidence interval.

In many cases, questions and responses were rephrased for clarity or brevity. These data rely on self-reporting, and strict statistical testing was not performed on these findings. Potential issues with self-reported data include, but are not limited to, the following: exaggeration, selective memory, and attribution errors on the part of respondents.

We’ll sleep easier if you link back to the full article each time you share this piece with someone in your network. Please only do so for noncommercial purposes and make sure everyone is getting the full story by giving credit where credit is due! 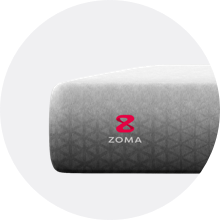 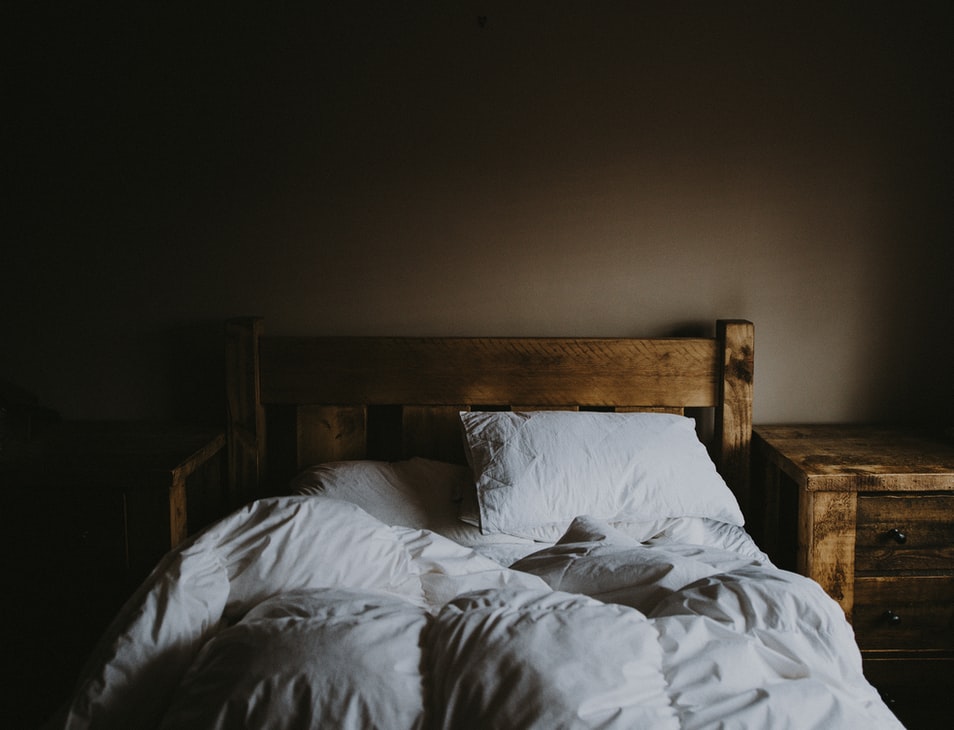 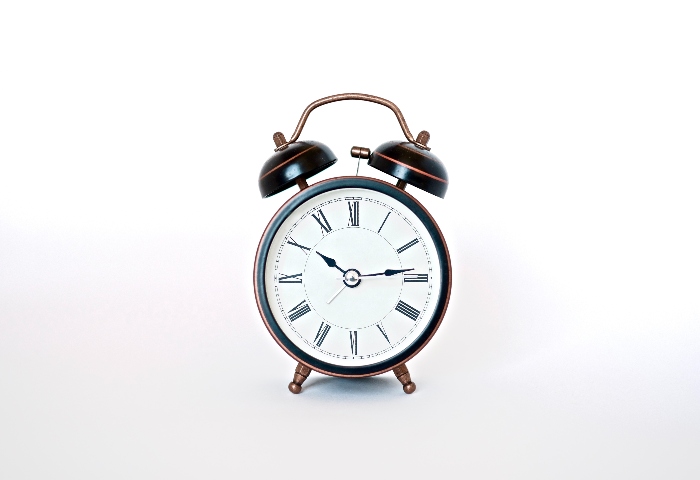 The Zoma editorial team is committed to delivering content that adheres to the highest editorial standards for accuracy, sourcing, and objective analysis. Every news article is thoroughly fact-checked by members of our editorial team. Furthermore, we have a zero-tolerance policy regarding any level of plagiarism or malicious intent from our writers and contributors.

All Zoma articles adhere to the following standards: